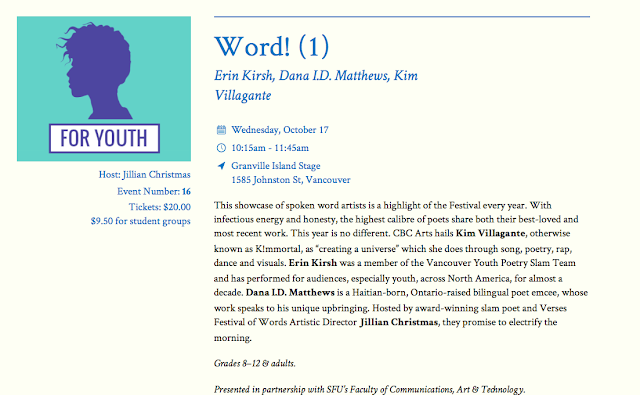 I used to write a lot of poetry when I was in my teen-aged years. Some of it was traditional rhymed poetry, some of it poetry with a purpose (a letter to my mother, an apology, an explanation of me) but a lot of my writing dealt with my teen aged unhappiness.

I have no idea of the teen aged experiences of others. I don't know if there were all those "fun drunken times", "make out sessions" or whatever other stories that may or may not have been have  embellished in retrospection. I participated in none of these activities. While my younger brother and sister seemed to have more active social lives, I cried and wrote. I was certain that I would be an unloved misfit for all of my life.

Yesterday, I had a new experience at the Writers' Festival. Word is a showcase of young (25-30)
spoken word artists, most of whom started out in poetry slams. I did not know what a poetry slam was because it is an oral poetry contest begun in the 1980's, a time when I was a mum and a young married woman. The general theme of the works was feeling to be an outsider (queer, person of colour, Jewish..)

Each of the artists who performed yesterday expressed anguish, anger and frustration in a way that brought me back to those earlier years of my life. Dana I. D. Matthews spoke of being an adopted black son with a Korean brother in a white family. Erin Kirsh listed  great people who were Jewish in response to an 8 year old's wish to be "normal" i.e. not Jewish.  Kim Villagante (Kimmortal), a queer filipinx, spoke of alienation and intolerance at a family birthday party.

The show was sold out! The classes of high school students obviously related to the artists on stage.
As a volunteer, I stayed until the end of the book signing. But remember, these are spoken word performers. The students gave them notebooks and agendas to sign. They asked about where to start in the performance arts. So many teens write poetry!


When I was young, there were no Internet, social media, or poetry slams. There was no way of knowing that alienation is a common phenomenon  for young people. Our family and our classmates are not necessarily our soulmates. Indeed, we may never find a soulmate or maybe we will. Life is not  a Hallmark greeting card all the time. Sometimes it is brutal and profane.


Yesterday, I learned a few things from much younger people. I learned about internalized prejudice (racism, sexism and misogyny) and that it was okay to be polyamorous. I learned that the first step to accepting others is to learn to accept ourselves. Funny, our church is working on becoming an affirming church.  The world is such a different place from what it was 50 years ago.