on February 22, 2019
‘Ill niver firyet, as lang as I can mind, da time wir Patie cam’ hame frae da Edinburrie Infirmary. He gade awa’ at da first o Aprile, wi da auld style, an’ we never kent onything mair aboot him til we hed a letter frae a man at yon place in Edinburrie whar dey cuir folk – an’ kill dem tu fir dat maiter – an’ hit was ret ta Daa sayin’ at wir Patie had been taen suddintly ill wi’ som Laetin name or anidder. Daa exed da skulemester, an’ he said hit was juist da Habrue name fir sturdy, an’ he said wir Patie hed been taen yon wy whan da ship wis some wy aff o’ a licht-hoose ‘at stands oot-a-decks frae Leith Docks. I niver ken muckle aboot dat pairt o’ it, bit onywy wi’ hed anider letter frae wir Patie’s nain hand, tellin’ wis a’ aboot it, an sayin’ he was haelin’ up bonnily, and dey wir a kind o’ a scruif comin’ oot ower him an’ at he wis comin tü no sae ill, an’ ‘at he expeckit ta be hame wi’ da first mune-licht.  A passage in Shetland dialect from The Scots Language Centre
Today is International Mother Language Day. Did you know that there are more than 7,000 living languages in the world? Forty percent of these languages are endangered!
When I was a girl, I was eager to learn other languages. French, as an official language of Canada, was compulsory. As a girl, I (with much of the western world) considered French to be the language of culture. Definitely worth learning! It's ironic how many times I've tried to answer a reluctant Grade 7's question "Why do I have to learn French? I'm never going to Québec."
Spanish was offered when I started Grade 10. I decided that language learning was "my thing" more than the other possible electives of the day. I have never regretted learning additional languages.
Never did I consider, until I started to visit Oaxaca, that "official languages" are the languages of conquest and of colonialism. Mexicans speak Spanish "verdad?" Actually, the Law of Linguistic Rights of the Indigenous Peoples recognizes Spanish along with 63 indigenous languages as "official languages".

There are more than 65 indigenous languages spoken in Canada but less than 1% of Canadians stated on the census that they were spoken in the home. Residential schools and government policies marginalized these languages.In Canada, English and French are our only official languages.  As we become more aware, I hope that a knowledge of any additional language will be encouraged. 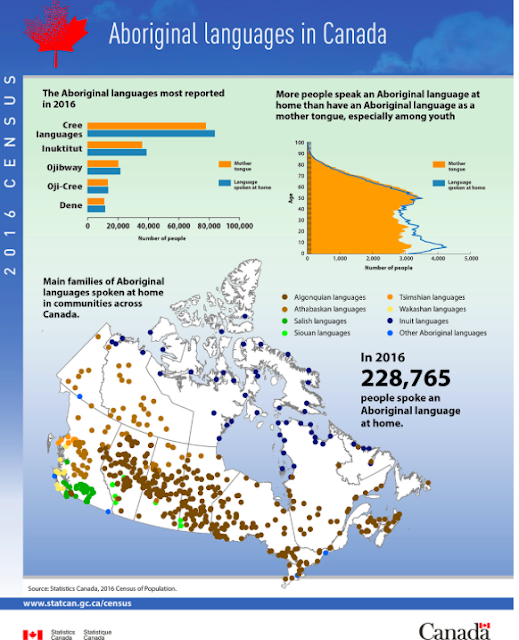 I had never heard of International Mother Language Day until I read View from Casita Colibri. In 10 days, I'll be in Oaxaca but I'm probably not going to learn Zapotec.